Below is the complete list of sources, references, links and permissions for the book, Collective Disruption, listed by chapter:

Creative Destruction: Why Companies That Are Built to Last Underperform the Market—and How to Successfully Transform Them by Richard Foster and Sarah Kaplan, Crown Business, April 2001

“The Case of the Disappearing Firms: Empirical Evidence and Implications” by Charles Stubbart and Michael Knight, Journal of Organizational Behavior, February 2006

The Alchemy of Growth by MehrdadBaghai, Stephen Coley, and David White, Perseus Publishing, 1999

“Managing Your Innovation Portfolio” by BansiNagji and Geoff Tuff, Harvard Business Review, May 2012

“Leading Through Connections” (Insights from the Global CEO Study) by IBM, May 2012

Sonny Jandial (the Partnering Group), interview by Michael Docherty, May 2014

“All Our Patents Belong to You” by Elon Musk, Tesla Blog (www.teslamotors.com/blog), June 2014

Faster: The Acceleration of Just about Everything by James Gleick, Vintage, September 2000

The End of Competitive Advantage: How to Keep Your Strategy Moving as Fast as Your Business by Rita Gunther McGrath, Harvard Business Review Press, May 2013

The End of Competitive Advantage: How to Keep Your Strategy Moving as Fast as Your Business by Rita Gunther McGrath, Harvard Business Review Press, May 2013

“Why Cisco Has Showered These 3 Men with Billions of Dollars” by July Bort, Business Insider, September 2014

The Rise and Fall of Strategic Planning by Henry Mintzberg, Simon and Schuster, January 1994

“Why Scott Cook Wants You to Stop Listening to Your Boss” as told to Drake Baer (www.FastCompany.com), October 2013

Sonny Jandial (the Partnering Group), interview by Michael Docherty, May 2014

“The Fairy Tale of Innovent and How It Came to Be” by Stephanie Keller-Bottom, eCorner (Stanford University’s Entrepreneurship Center), April 2006

Ricardo dos Santos (consultant and ex-director at Qualcomm), interview by Michael Docherty, May 2014

“From Startup to Scaleup: The Next Wave of Innovation” by David Butler, Coca-Cola Unbottled Blog, August 2013

“Exploring and Exploiting Your Way to Growth” by Michael Tushman, HBR Blog, July 2012

“How You Can Start the Next Zipcar,” presentation by Robin Chase at the Lean Startup Conference 2013, December 2013

“How Yahoo Killed Flickr and Lost the Internet” by Mat Honan, Gizmodo (www.gizmodo.com), May 2012

“Why Most Startup Acquisitions Fail, and Always Will” by Mathew Ingram, GigaOm (www.gigaom.com), February 2011

“Why P&G’s Smile Is So Bright,” Businessweekmagazine, August 2002

“How I Did It: Charles Hallberg, Founder & CEO of MemberHealth” by Bobbie Gossage, Inc. Magazine, September 2007

“Tony Fadell on Nest’s Plans to Infiltrate Your Home” by Lauren Goode, re/code (www.recode.net), May 2014

Buy the Hardcover, Paperback or Kindle version on Amazon.com. 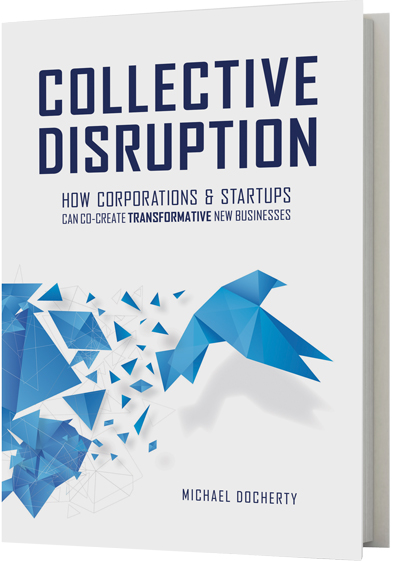 Buy the paperback here:
“If you’re a business leader in a large company who wants to be successful in transformational innovation, you can’t simply stay within your four walls. Docherty provides a compelling framework to accelerate growth by tapping into the startup ecosystem for disruptive innovations.”
Asoka Veeravagu, VP new business development, Jarden Consumer Solutions